A Brief History of Civil Rights in the United States: ADA Amendments Act of 2008

The ADA Amendments Act of 2008 (ADAAA) amended the Americans with Disabilities Act of 1990 (ADA) and other disability discrimination laws at the federal level.

The ADAAA was passed in September of 2008 in response to a number of decisions by the Supreme Court that had interpreted the original text of the ADA. Congress stated in its introduction to the ADAAA that those decisions limited the rights of persons with disabilities so the ADAAA reversed those decisions by broadening the law. Specifically, the ADAAA changed the definition of the term "disability" by clarifying and broadening it - which, in turn, increased the number and types of persons protected under the ADA and other federal nondiscrimination laws. The ADAAA was designed to strike a balance between employer and employee interests, as it was felt that employer interests had been favored too much previous to the amendments.

One thing that the ADAAA required was that courts interpreting the ADA and other federal disability laws focus on whether the covered entity had discriminated, rather than whether the individual seeking the law's protection had an impairment that fit within the technical definition of the term "disability." The Act retained the ADA's basic definition of "disability" as an impairment that substantially limits one or more major life activities. It also retained the need for a record of such an impairment or being regarded as having such an impairment. However, the ADAAA changed the way that the statutory terms should be interpreted, again in the interest of broadening the interpretation, rather than accepting the previous narrow interpretations. 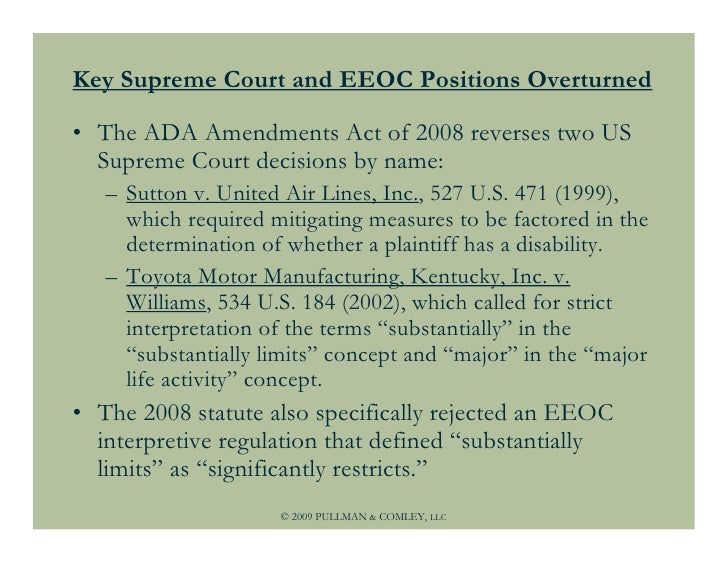