A Brief History of Civil Rights in the United States: Proposition 8

California has always been thought of as a progressive state. In general, the west coast is seen as more liberal than the southeastern seaboard. However, events arose surrounding gay rights in 2008 in California that threw its stance as a bastion of liberal progressivism into question. Proposition 8, known colloquially as Prop 8, was a California ballot proposition and a state constitutional amendment passed in the 2008 California state election. The proposition was created by opponents of same-sex marriage before the California Supreme Court issued its ruling on In re Marriage Cases. This decision found the 2000 ban on same-sex marriage, Proposition 22, unconstitutional. In the long run, Prop 8 was ruled unconstitutional by a federal district court in 2010, although that decision did not go into effect until 2013, following the conclusion of Prop 8 advocates' appeals, which went all the way to the U.S. Supreme Court. 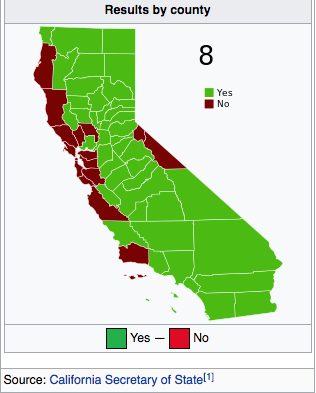 Prop 8 negated the In re Marriages Cases ruling by adding the same provision as Proposition 22 to the California Constitution, providing that "only marriage between a man and a woman is valid or recognized in California." As an amendment, it was ruled constitutional by the California Supreme Court in 2009, on the grounds that it "carved out a limited [or 'narrow'] exception to the state equal protection clause." One justice dissented, noting that exceptions to the equal protection clause could not be made by any majority since its whole purpose was to protect minorities against the will of a majority. One reason that Prop 8 was upheld by the Supreme Court while Proposition 22 was not rests in the fact that Proposition 22 was only a statute while Prop 8 was an amendment to the state constitution. Statutes do not have the same weight as constitutional amendments - which would arguably be a reason to overturn Prop 8 all the more. But in this instance, the court saw it as a reason to uphold the will of the voters.

Among the advocates for Prop 8 were religious organizations, most notably the Roman Catholic church and the Church of Jesus Christ of Latter Day Saints. While it is estimated that Catholic Archbishops and lay organizations were able to donate about $3 million to Prop 8, Mormons contributed over $20 million, a good part of that coming from Utah. LDS church members were said to be about 80 to 90% of the volunteers for door-to-door canvassing.

Once Prop 8 had been upheld by the state courts, two same-sex couples filed a lawsuit against Prop 8 in the U.S. District Court for the Northern District of California in Hollingsworth v. Perry. In August of 2010, Chief Judge Vaughn Walker ruled that the amendment was unconstitutional under both the Due Process and Equal Protection Clauses of the Fourteenth Amendment, since it removed rights from a disfavored class with no rational basis. The state government supported the ruling and refused to defend the law. The ruling was stayed pending appeal by advocates of Prop 8. In 2012, the Ninth Circuit Court of Appeals, in a 2-1 decision, reached the same conclusion as the district court, but on different, narrower grounds. The court ruled that it was unconstitutional for California to grant marriage rights to same-sex couples, only to take them away shortly after. This ruling was then stayed pending appeal by Prop 8's advocates to the U.S. Supreme Court.

On June 26, 2013, the U.S. Supreme Court issued its decision in Hollingsworth v. Perry, ruling that proponents of initiatives like Proposition 8 did not possess legal standing to defend the resulting law in federal court. Therefore, the Supreme Court vacated the decision of the Ninth Circuit, and remanded the case for further proceedings. The Ninth Circuit, on remand, dismissed the appeal for lack of jurisdiction. This left the 2010 decision of the district court as the binding decision. Thus, Prop 8 was held unconstitutional and Governor Brown was free to permit same-sex marriages to recommence.